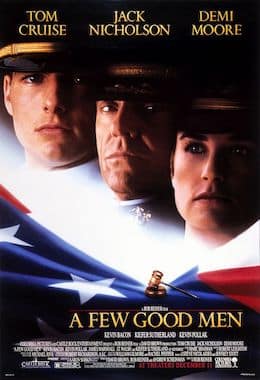 Lieutenant Kaffee is a Navy lawyer. When two men accidentally kill a soldier, he is assigned to defend them. Initially working out a quick and easy plea bargain with the prosecuting lawyer, Kaffee is persuaded to investigate the case further by a determined colleague. Together they take on the might of the army establishment, as the trail of evidence leads to the accused’s commanding officer.

This is a gripping courtroom drama. It is a thriller that is intense and full of intrigue. There are superb performances from Jack Nicholson, Demi Moore, Kevin Bacon and Kiefer Sutherland.