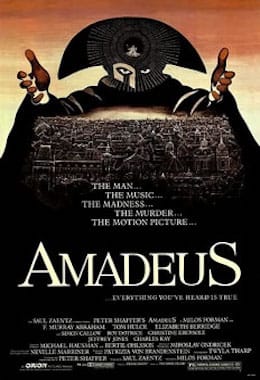 The film tells the story of the composer Antonio Salieri and his relationship to the man he later claims to have murdered, Wolfgang Amadeus Mozart. Having already gained the confidence of the Emperor, Salieri is frustrated by the arrival of the genius Mozart, a man who quickly usurps his position in the court. His frustration is magnified by both his disapproval of Mozart’s vulgar behaviour and by the fact that it is he who can appreciate the true beauty of the young composer’s work. When Mozart dies under mysterious circumstances, can it really be Salieri who is to blame?

This film has the most amazing soundtrack, it’s Mozart, what do you expect. There is brilliant acting from the leading characters which gives depth to an engaging story.