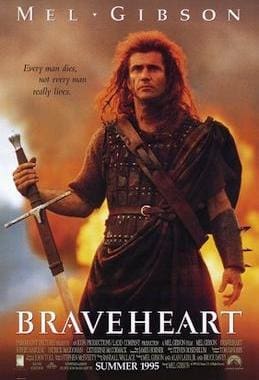 In 14th century Scotland, the English nobles are staking their claim for lands and the Scottish throne. When William Wallace is left an orphan by the brutality of the English, he vows to make Scotland strong again. Wallace grows up into a paradox of a man – on the one hand very well educated, on the other a ruthless killer and barbarian. As an adult he succeeds in uniting the Scottish clans to fight the English oppressors, and is only undone by betrayal and greed.

This is an epic classic film. It is full of action, war, fighting and drama. It is Mel Gibson at his best, actor and director.