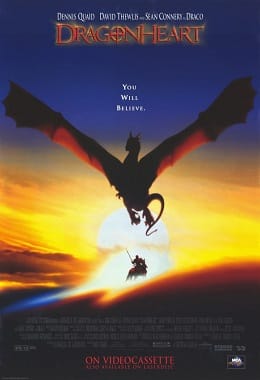 Dragonheart Movie Review: Knight Bowen (Dennis Quaid) attempts to instill the values of King Arthur in his pupil, Prince Einon (David Thewlis), in the hope that he will rule more wisely than his tyrannical father. Einon is given one half of a dragon’s heart after he is wounded in return for promising to rule well, but he reneges on his promise by becoming as big a tyrant as his father. Then Bowen vows to kill every dragon in existence. Years later he meets the dragon Draco (Sean Connery), and, after initial hostility, the two strike up an unlikely friendship.

This is an enjoyable fantasy adventure for children, particularly if they love all things dragons. Also there is a great cast.