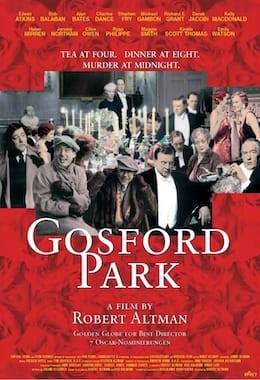 TEA AT FOUR. DINNER AT EIGHT. MURDER AT MIDNIGHT.

The film is set in 1932. The action unfolds during a weekend shooting party hosted by Sir William McArdle, and his wife Lady Sylvia at his estate, Gosford Park. Among the guests are friends, relatives, the actor and composer Ivor Novello, and an American film producer. When Sir William is found murdered in the library, everyone and their servants becomes a suspect.

This is one to watch if you like Downton Abbey. The acting is superb, but what do you expect with a star-studded cast.

The story line could have been better.