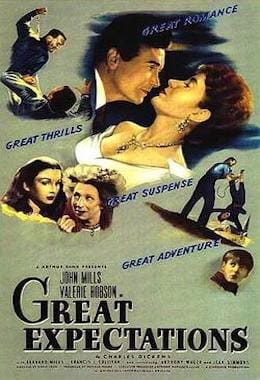 This is an adaptation of Dickens’s novel about a young orphan who develops ‘great expectations’ after a mysterious benefactor pledges to sponsor his transformation into a gentleman. Miss Havisham, an eccentric old woman, seeks a playmate for her charge, Estella, it is Pip who is sent for. The boy quickly falls in love with Estella, though his hopes seem forlorn due to the gap in social standing between the two. When an older Pip discovers that he has a benefactor, he feels that Estella may be won, but has he read the situation correctly?

This is one of the best adaptations of Dickens’ novel. It’s literally what it says on the poster. “Great thrills, great romance, great adventure, great suspense.” The atmosphere is intense and so are the characters. Just brilliant!