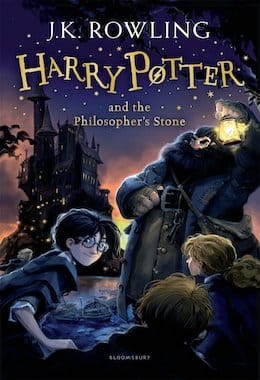 Letters start dropping on the doormat at number four, Privet Drive with Harry Potter’s name on them. His grisly aunt and uncle quickly confiscate them. Then, on Harry’s eleventh birthday, a great beetle-eyed giant of a man called Rubeus Hagrid bursts in with some astonishing news. He tells Harry that he is a wizard, and he has a place at Hogwarts School of Witchcraft and Wizardry. For Harry, an incredible adventure is about to begin!

Most of the novels in this series of 7 books are brilliant and engaging. This first book,  in particular, is magical as it’s where you first meet all the characters. Also the books are well written and are for both children and adult.

The sixth book in the series ‘Harry Potter and the Half-Blood Prince’ is the weakest. It would have to have a rating of 7*.