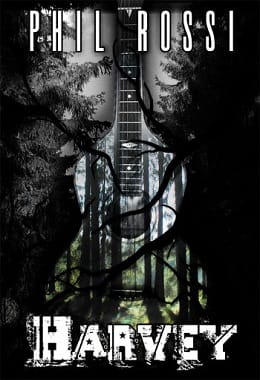 Television singing sensation Calvin Hubbard has been caught with his hand in cookie jar. An illicit affair with a contest judge costs him not only the competition crown, but his musical credibility as well. Fleeing the media fallout, Calvin exiles himself to the backwoods town of Harvey, Virginia. With a little solitude and a lot of cheap beer, he plans to write the next great rock and roll album and resurrect his career. But Calvin doesn’t know that a man has just been buried alive in the woods outside of town, and that this quiet murder is just the first in a string of macabre events.

Harvey is a edgy, tense horror, thriller.  It is well written, has a great plot with interesting characters that you care about.  Phil Rossi needs to be more well known, he is a brilliant author.