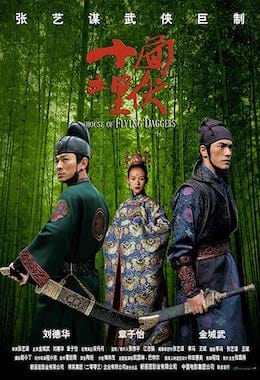 Leo and Jin are two police officers who have to have to ferret out the leaders of a revolutionary faction known as the Flying Daggers. Jin arrives in disguise at a brothel, where the members are allegedly working. Here he meets a beautiful blind dancer named Mei. But when Jin drunkenly attempts to have his way with her, Leo has to intervene. After gaining her trust, Leo arrests her and informs her that she’ll be tortured if she doesn’t tell all she knows about the Flying Daggers.

There is a lot of action in this film and the fighting is superb. Also the cinematography is beautiful.