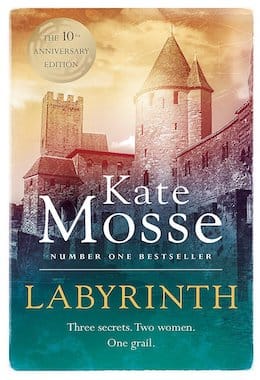 In July 1209, Carcassonne, a 17-year-old girl is given a mysterious book by her father. He claims it contains the secret of the true Grail. Alais cannot understand the strange words and symbols hidden within but knows that her destiny lies in keeping the secret of the labyrinth safe. In July 2005, Alice Tanner discovers two skeletons in a forgotten cave in the French Pyrenees. Puzzled by the labyrinth symbol carved into the rock, she realises she’s disturbed something that was meant to remain hidden. Somehow, a link to a horrific past – her past – has been revealed.

This is a hard book to review as at times it is a really good read, with twists and action going on.

However at times, it is slow going and feels heavy with lots of unnecessary padding.