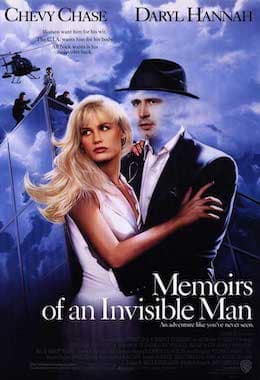 Just a quick nap and weary stock analyst Nick Halloway is sure he’ll emerge good as new. Instead he wakes up good as gone. Vanished. Poof. Thin air. A nuclear accident has made Nick invisible. Invisibility makes it easier to spy on agents (particularly chief adversary Sam Neill) who’s put him in his predicament. And can he romance a lovely documentary producer in a way she’s never ” seen” before.  Seeing is believing. And enjoying.

It’s an easy watching film and the story is fun. Not to be taken seriously, just a nice Chevy Chase film.