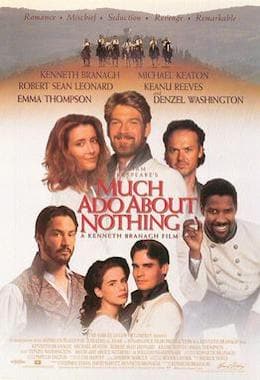 The film is based on William Shakespeare’s play of the same name. Two love stories are intertwined. One story follows the formal, romantic relationship between Hero and Claudio. Claudio realizes, after returning from war, that he is deeply in love with Hero and wants to ask her father for permission to marry her. Don Pedro, helps Claudio propose marriage, with some momentary confusion about who the suitor is — Don Pedro or Claudio. The other couple, Beatrice and Benedick, work hard to give the impression that neither is interested in the other, after some bad experiences in earlier encounters with one another.

This is one of the best adaptations of Shakespeare’s play and is filled with a star studded cast. It is funny and easy to watch. The scenery is magical to top it off.