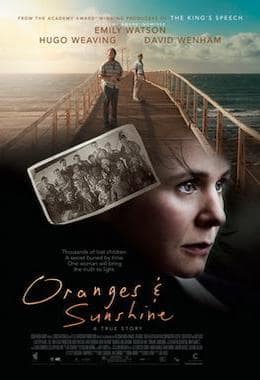 The film tells the story of Margaret Humphreys, a social worker who uncovered  a horrific scandal: the deportation of thousands of children from the United Kingdom to Australia. Almost single-handedly, Margaret reunited thousands of families, brought authorities to account and drew worldwide attention to an extraordinary miscarriage of justice. Children as young as four had been told that their parents were dead, and been sent to children’s homes on the other side of the world. Many were subjected to appalling abuse. They were promised oranges and sunshine: they got hard labour and life in institutions.

The storyline of this film needed to be brought to light. The tales of deportation are harrowing and something no-one should ever have had to go through.

How this story is portrayed is another matter. You barely get to know the characters and their stories. ‘Long Lost Family’ (Davina McCall) fills in more than this film does. Emily Watson’s acting leaves a lot to be desired too.