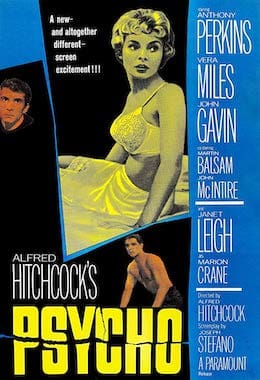 Alfred Hitchcock directs this Oscar-nominated thriller starring Janet Leigh and Anthony Perkins. Marion Crane goes on the run after stealing $40,000 from one of her employer’s clients. Taking a wrong turn in a storm, she arrives at the isolated Bates Motel, run by the twitchy Norman, who is constantly at the beck and call of his unseen mother. When Marion takes a shower in her room, a sudden knife attack brings her life to an end. Upon discovering her body Norman covers up the murder, but it is not long before Marion’s sister and boyfriend are attempting to track her down.

This is a classic shocker. Even thought it’s black and white, it makes it more effective. Also Anthony Perkins is brilliant in this role.