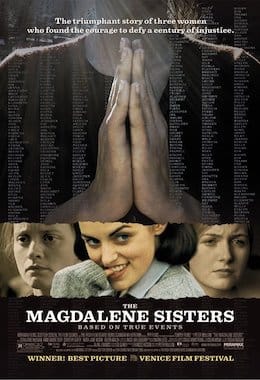 In Ireland, 1964, so-called “fallen” women are considered sinners who needed to be redeemed. Four young women – Margaret (raped by her cousin), Bernadette (too beautiful and coquettish), Rose (an unmarried mother) and Crispina (an intellectually disabled unmarried mother) – are forced by their families or caretakers into the Magdalene Asylum. The film details the disastrous lives of the four girls whilst they are inmates, portraying their harsh daily regimen and their squalid living conditions put on at the laundries.

This is a harrowing and yet powerful film to watch showing the atrocities of what happened in the laundries. The acting is superb and the scenes are strong and emotional.