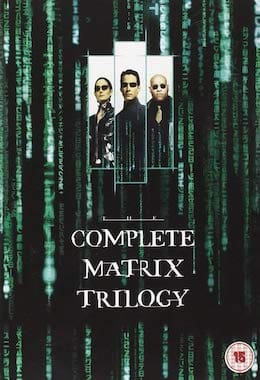 The series features a cyberpunk story of the technological fall of man, in which a self-aware artificial intelligence has wiped most of humanity from the Earth except for those it enslaves in a virtual reality system as a farmed power source, and the relatively few remaining humans who are free of that system. The A.I. agenda is to destroy all humans who are free, considering them a threat/disease. The first film focuses on a computer hacker named Neo who searches for the truth behind the mysterious force known as the Matrix. He finds his answer with a group of strangers led by the charismatic Morpheus.

The first film in the trilogy is the best. The effects are amazing and the main character was the perfect role for Keanu Reeves.

It can get a bit confusing at times, particularly in the second and third film.