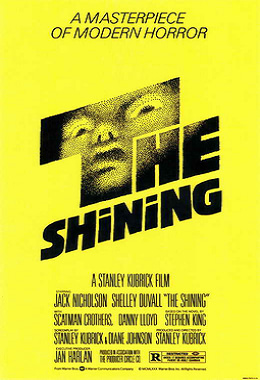 Jack Torrance takes a job as an off-season caretaker at the remote Overlook Hotel in Colorado. Eager to get started, Jack disregards warnings that the isolation drove a former caretaker mad, and moves into the massive resort with his wife Wendy and son Danny. But Danny has a supernatural gift which makes him aware of an evil lurking in the hotel, and sure enough, as winter storms cut the hotel off from civilisation, the hotel and seclusion begin to effect Jack.

The Shining is a classic horror film, it is brilliant, suspenseful, atmospheric.  Stanley Kubrick does a great job directing and Jack Nicholson puts in an outstanding performance.  “Here’s Johnny!”

Deviates from the novel slightly, Shelly Duvall can be a little annoying.