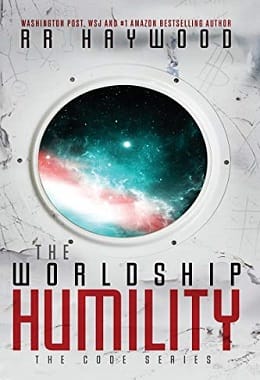 The Worldship Humility Book Review: Sam, an airlock operative, is bored. Living in space should be full of adventure, except it isn’t, and he fills his time hacking 3-D movie posters. Petty thief Yasmine Dufont lives in the lawless lower levels of the ship, surrounded by violence and squalor, and now she wants out. She wants to escape. Meanwhile, the Gagarin returns with a code of information that suggests a habitable planet has been found. This news should be shared with the whole fleet, but a few rogue captains want to colonise it for themselves. When Yasmine inadvertently steals the code, she and Sam become caught up in a dangerous game of murder, corruption, political wrangling and…porridge, with sex-addicted Detective Zhang Woo hot on their heels, his own life at risk if he fails to get the code back.

This is a fun space adventure full of likeable characters and nasty villains. Also the author writes well and the pace is fast. Looking forward to reading the next in the series.