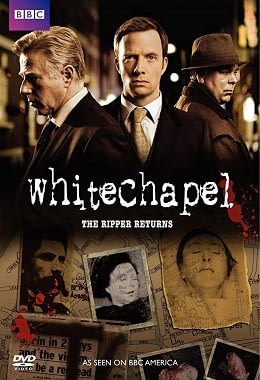 Whitechapel TV Review: The streets of London’s East End are awash with blood. A murderer stalks the night, picking off vulnerable women and leaving them brutally butchered. For fast-tracked, media savvy DI Chandler (Rupert Penry-Jones) it’s his first big murder case; for front-line, hard-bitten DS Miles (Phil Davis), he’s now saddled with a boss who would rather talk about Emotional Intelligence than gut feeling. Neither of them have a clue, until renowned ‘Ripperologist’ Edward Buchan (Steve Pemberton) draws their attention to the similarities between the Jack the Ripper killings in 1888 and the modern-day murder.The race is on to succeed where police officers failed over 100 years before – to catch the copycat killer before he strikes again.

This is a nice british crime tv series with some good acting.